Another nice Saturday at Big Judo. Its the end of the third term and a chance to reflect.

We have recently had a group of little kids move up to the big kids class.  Its great to see the strategic plan is slowly taking shape.  Years ago we started with group of six-seven year olds and slowly but surely we have gone from little kids to bigger kids. We now have a couple of Green Belt kids and look at all the Orange Belts! A few years ago all we had was White Belts so it is enormously satisfying to see this progression. 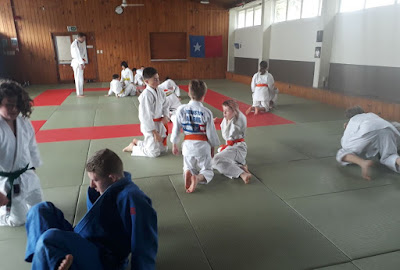 Even more important we have guys like Noah, Jacob, Geoff, Kyl, Trevor, Tony and Tracey who in the next year or two will move from Blue to Brown to Black who are all helping out with coaching.  My aim to become redundant is approaching! It also so important that we get our young competition players working with kids and coaching.  They are the future. 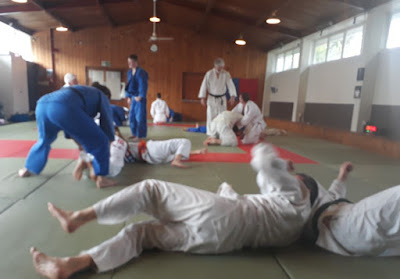 Adults are growing in the same way. We started off with a gang of Dads.  Slowly over time we have brought young people through from the kids into the adults and attracted more senior players.  Now we have Green and Blue Belts who have come right through with Big Judo.  It  is very satisfying.

We have also slowly qualifying or attracting good instructors. Nelly coming back on the mat as a coach has improved our standard of Judo enormously.  Tony finally completed his coaching qualification.  Todd joined us last year and is a Shodan with a Level 1 Coaching Qualification

By 2021 we will have a really good group of Blues, Browns and Blacks. Providing a good base for further growth. 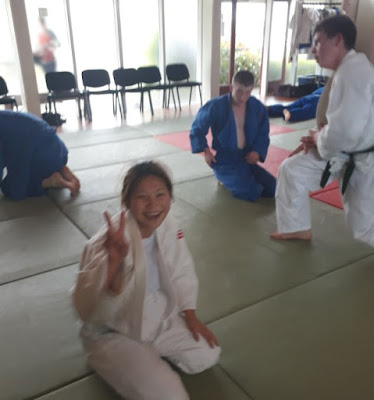 This is photo of Cherry (Chisato) who we will farewell soon.  It is sad to see her go. She is a lovely person and fights like a demon. She has been an example of courage and determination and raised our technical standards.  We will miss her terribly.  She is the second good female player that has come and trained with us. Pia from Germany was the first and she was awesome too.

Big Judo is like a family and we are proud that Cherry and Pia both had a good time, were well looked after and will always be part of Big Judo.

Posted by Ben Stallworthy at 16:43