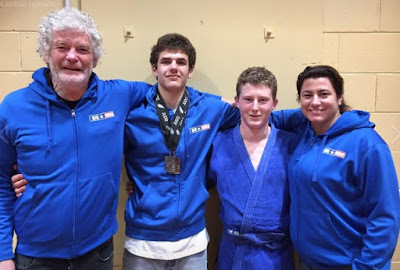 Noah did very well in the Junior Men's Division. Winning a Bronze in the very competitive -81 kg Division. This was a magnificent performance considering the size of the pool, the quality of the competition and the fact that Noah is actually a Cadet. No wonder Nelly looks like a Cheshire Cat! 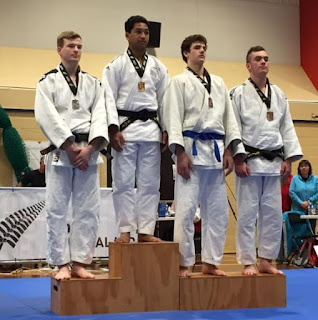 Noah then came second in the Junior Men's Open. No shame in that.  Keightly Watson fresh from the Junior Worlds is some pretty tough competition. 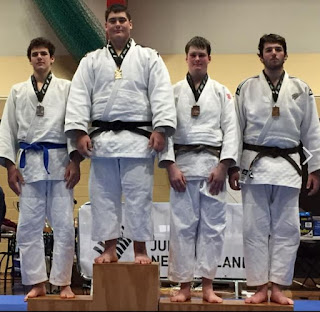 The next day, fight in his age group,Noah won two Golds one for his weight and one in the Open! 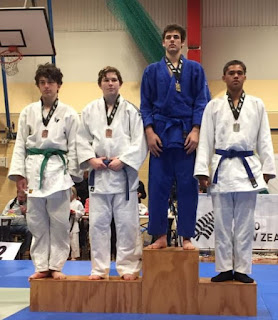 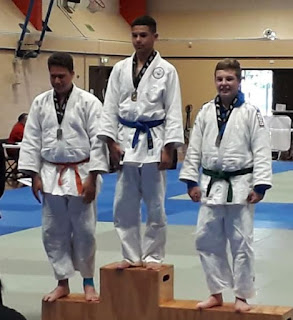 Big's youngest competitor Wiremu had a good day.  With no other boys in his weight he had to fight in the next weight division up. Hey, no problem he won that then went on to win the Junior Boy's Open.  What a day three Golds! 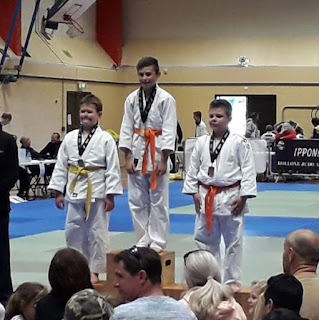 And last but not least big ups to Jacob and Don.  Jacob is working hard and fighting well but breaking into a competitive weight division is really hard.  And Don well he certainly has the warrior spirit but it is now in a 58 year old body,

Most importantly it is a day we can all be proud of because Big Judo is team effort.  With the exception of Don all of our fighters are people trained from the start and Big Judo.

The coaches work together and support each other.

The parents and senior students support us and together we are starting to build some good Judo players within a strong Judo family.  Its awesome.

No wonder these guys are smiling! 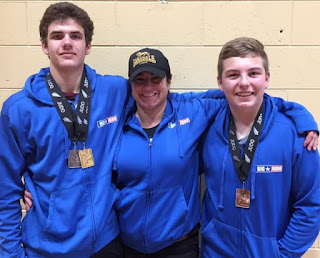 Posted by Ben Stallworthy at 23:18

Big Judo isn't just 'big' in Sandringham. The Pukekohe crew are also pushing forwards and growing the team. Look at all the kids, especially the new ones.  Better yet we have really supportive parents and four experienced instructors. Even better Tracey was back on the mat last week and it was fantastic to see her. Awesome work! 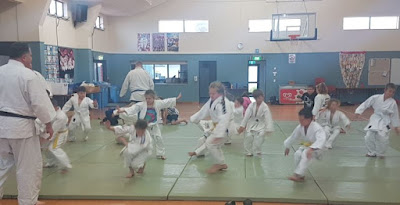 Posted by Ben Stallworthy at 14:37

Big Blue Judo Machine gives notice that the 2018 AGM will be conducted on Saturday 3 November  2018 at 4.30 pm at the Sandringham Dojo.

As per Article 11.2 of the Constitution the business of the Annual General Meeting shall be:


Members of Big Blue Judo Machine are welcome and will be emailed an agenda before the meeting.
Posted by Ben Stallworthy at 13:09

This week was a big week at Big Judo,.  Keightley Watson came to visit. Keightley is a big young New Zealand Judo player weighing in about 150 kg and with nice technique that he has recently been honing in the Netherlands it was fantastic to host him.  He is on his way to the Junior World's in the Bahamas.

So Big Judo rolled out a crew of our big boys (even I had a wrestle with him and Sam Rosser came down too) and we all had good time.

Keightley is a great young guy he trained hard, didn't beat me and the other oldies up too much and we all had good time. It was also nice to discuss Judo with him and see a few of the techniques he has picked up in Europe.

The best thing about hosting Keightley was that he was such a nice guy. Judo's not just about beating people up and winning its about relationships. Talking to him I thought a lot about Wanganui Judo Club, his Uncle Wayne and my mate Shaun Walton. Great guys and hopefully, this will be the first of many visits between Big Judo and Wanganui Judo Club and that those relationships will continue into the next generation.