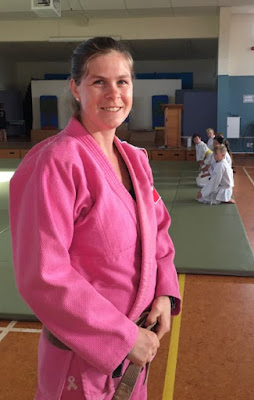 A nice photo of Tracey back on the mat after a maternity break. Tracey is another of our awesome female Judo instructors and tonight I was thinking about how nice and 'old skool' we are at Pukekohe.

Some readers will remember doing Judo in little clubs based in school halls, scout dens or church halls. Once upon a time there were lots of little clubs like that. Mats down dojos were rare so we all had to work together putting the mats down and lifting them up after training. It was hard and you had to be committed.

In fact Nellie and I started at Mount Roskill Judo Club in 1982 before going to University and tonight I was feeling a little nostalgic.

It was awesome to see senior people like Tracey, Todd and Geoff who like sharing their knowledge so much that they never moan or complain about putting out the mats.  Instead its all about teaching kids and other adults Judo. Even if the set up is a little basic the 'old skool' Judo principles of bravery, service and Judo excellence were being put into practice.

I guess my reflection from tonight is that isn't a flash dojo that makes a good club but rather good people.  At Big Judo we are really lucky to have a great group of people who love Judo and are keen to help others learn.  Even if we don't have a mats down dojo in Pukekohe we certainly have a good 'old skool' approach and plenty of happy kids (and some happy adults) learning good Judo.