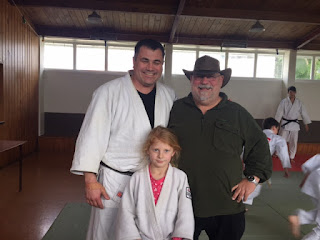 We had a visit from an old friend this Saturday.

His grand-daughter Abigail is doing Judo with us. Lyle and his daughter Ayesha (Abigail's mum) used to do Judo at the old Pukekohe Judo Club.

In the late 80's Pukekohe Judo Club had about 200 members and was strong club.  Lyle was one of its stalwarts and in the late 80s and early 90s me, Shaun Walton (and sometimes Daniel Gowing) used to regularly visit the club and a strong relationship existed between University Judo Club and Pukekohe.

It was good times and it is fantastic to have Lyle's grand-daughter on the mat with us.
Posted by Ben Stallworthy at 03:54